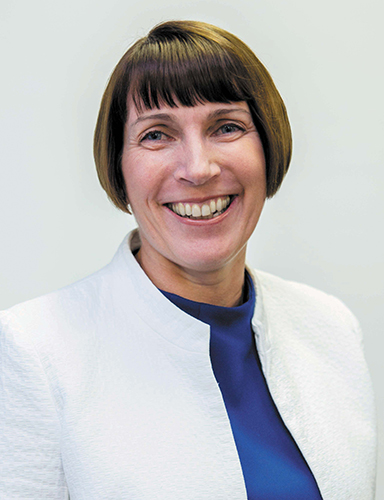 For Jacqui Francis, being Executive Director of Townsville Catholic Education brings its share of joys and challenges, but few could have predicted quite the level of challenge that accompanied the start of the 2019 school year when the city was deluged by a flood of historic proportions.

“It’s incredible, because we’re always talking about water here in Townsville, about the fact that we haven’t got enough of it, and now here we are in the middle of a 1 in 100 year flood,” she says.

“We were fortunate that we only had major damage to one of our schools, St Margaret Mary’s College, but certainly many of our families and teachers and staff members at the schools have been affected and we’re putting in place recovery initiatives.

“The support that has mobilised across the community has been amazing and, of course, in our own Catholic context, Centacare is commencing a community program to assist people in various ways.”

Jacqui, who was appointed to her role in 2018 by Bishop Tim Harris, says while she wasn’t planning to start the new school year with an epic flood, “you just have to take it in your stride and work together to face the challenges”.

In many ways, Jacqui’s career up to now has prepared her well to deal with the unexpected.

“My life has taken me in directions I never dreamed of when I was starting out,” she says. “I think that because I’ve been prepared to give a few different things a go, some wonderful opportunities have found me.”

Jacqui grew up in Traralgon in Victoria’s Gippsland region and attended the Catholic schools there, before heading off to Melbourne to take up a Bachelor of Economics.

However, after a year, she returned home, having decided that the Economics degree wasn’t for her.

“I have a lot of teachers in my family and they always seemed to be enjoying themselves in their work and I hadn’t experienced that with the Economics,” she says.

“I think basically I realised that I needed to be in an area more around people.”

She completed a Diploma of Primary Teaching, but after graduating, found that teaching jobs were hard to come by with the Kennett Government having embarked on a program of closing schools.

After doing some supply and contract teaching work, Jacqui decided to broaden her skills base by heading back to university to do a Bachelor of Education in School Librarianship.

“With the librarianship degree under my belt I knew I would be well-placed to find other alternatives if the teaching jobs weren’t available,” she says.

Her first librarianship job was at Broadmeadows Secondary College, a big public school in Melbourne’s western suburbs, where she worked in a big multicultural community, as well as with disadvantaged students and also had the chance to automate the library.

Jacqui’s next stop was Sydney, where she moved to take up a job in the specialist library of the Australian Institute of Police Management.

“It was my dream to work in a specialist library because working with special collections allows you to be more expert in an area,” she says.

After working with police from all jurisdictions across Australia, she was asked to move into the consultancy arm of the Institute to work on special projects, especially in the area of assessment centres.

“This was an interesting time because it was the time when the police were moving away from the seniority system into a more merit-based promotions system,” she says.

“I worked in capacity-building type projects and my educational background came in handy there, giving me the ability to facilitate and draw out the key points in discussions, so I found those teaching skills were really transferrable.”

From there, Jacqui moved into state government, working in the NSW Rail sector in the learning and development area for all customer-facing functions.

Her next move, to the Roads and Traffic Authority (which later became the Roads and Maritime Services) saw her pivot again, this time into Human Resources  and eventually into the role of General Manager in the RMS’s Business Strategy Area in the Licensing, Registration and Freight Directorate.

Jacqui ended up leading the RMS’s Corporate Directorate in the Business Strategy area, before deciding, with her husband, that it was time to move on, during a period of restructuring in the NSW government transport sector.

She applied to Townsville Catholic Education for the role of Director of Organisational Services and Capability and started the job in December 2013. Four years on, she was encouraged  to apply for the position of Executive Director.

“It was another case of opportunities finding me, rather than me finding them,” she says. “But really, all the different jobs I’ve had, studies I’ve done, and experiences I’ve gained have led me to this job and I’m so glad, because I love it.”

Jacqui oversees a system of 29 Catholic schools in one of Australia’s most diverse dioceses, ranging from Townsville on the coast, up north to Ingham and Palm Island, extending west right across Queensland, taking in places like Winton and Hughenden and south to Proserpine.

“Each of those places are really unique communities and we approach the task in a co-responsible way, so that just because you go to a smaller school, it doesn’t mean you’ll have any less an educational experience than if you go to a bigger school. Our Principals are empowered and supported in leading their particular, unique school community.”

Asked what she loves most about it, Jacqui is quick to reply: “It’s the people. Definitely the people. In all the roles I’ve had, I’ve always prized the importance of the people and what people can do, and  this job is no exception”.

“Our Principals and staff are first-rate and I admire the commitment of the teachers, I really do.

“I love that we have such an important mission, to nurture the lives of children and to nurture every aspect of their lives, including, of course, their faith life. And so my job and the job of our office here is to support the teachers in the class-rooms who are doing this work day-to-day.”

Jacqui says she feels “fortunate to work in a job where you don’t have to leave your values at the door”, and is also grateful for the role models in leadership she has worked with during her career.

“I’ve worked with some great leaders, particularly in the latter years of my career. Dr Cathy Day, who appointed me to my last role here in Townsville Catholic Education was, and remains, a great role model for leadership and I’ve worked with other great people who have role modelled leadership for me,” she says.

“But, I’m always working at it. You’re never ‘there’. You’re always learning and that’s what is so great about it.”