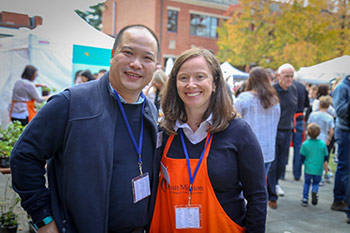 A practical, faith-in-action has always inspired Helen Forde and so, she says, her role at the helm of Jesuit Mission where she oversees the Australian Province’s missionary activity in 14 countries feels like “coming home”.

Helen has been Chief Executive Officer of Jesuit Mission for nearly four years and says she knows she’s in just the right place.

“I feel incredibly lucky to have this job. In fact, it doesn’t feel like a job, but a vocation,” she says.

Helen was born in Belfast, Northern Ireland and she moved to Australia with her family when she was just 11 months old.

“My family left Ireland because of the Troubles,” she says. “They just felt it wasn’t a place to raise children.”

Her father had siblings who had emigrated earlier and settled in Adelaide and so that’s where the family settled.

“I was schooled in Adelaide. I’m a Loreto girl. I think we had a fairly normal kind of upbringing,” she says.

“I’m the eldest of three children and we grew up in a very strong, practising Irish Catholic family.”

Helen chose to study languages after leaving school, and in her second year of university, she moved with her family to Sydney.

She found the move hard going at first, but soon made friends through her involvement in the Young Adult programs at St Francis Xavier church, Lavender Bay and at St Patrick’s, Church Hill.

“Many of my friends to this day are from that network,” she says. “And I think that group probably kept me connected to the Church.

“Up to that point I had probably gone along to Church to please my parents but there was a really strong community of young adults there at Lavender Bay and Church Hill in those years hosting events like Talking Tables, ALPHA, and a Dialogue series, with different speakers.”

But after university, with a Languages degree in French and Spanish under her belt, Helen had no idea what she wanted to do.

“My first job came about quite randomly through meeting a contact when I was out in Sydney one night celebrating having finished uni,” she says.

“I got talking to this fellow, who said, ‘You look like a bright spark, why don’t you ring this number tomorrow. They have a job going’.”

That man turned out to be businessman and future prime minister Malcolm Turnbull.

Helen did ring the number and soon had her first job as an office assistant at Turnbull and Partners.

“I was essentially the office dogsbody,” she laughs. “But it did give me a really good insight into business. There were lots of interesting people coming in and out of the office. And there was a lot going on. Malcolm had interests in the Republican Movement, the beginnings of the Internet through OzEmail of which he was Chair, as well as interests in China and Russia.”

Twelve months later and “feeling relatively bored” with her office assistant’s job, Mr Turnbull offered Helen the job as his executive assistant. Later, she moved into other areas of the business, working at OzEmail for nearly four years in media relations and investor relations.

From there, Helen took a marketing and communications job with one of Kerry Packer’s international companies called eCorp and then worked for the big global investment company Charles Schwab.

“During all this time I’d always been actively involved with volunteering. I’d go out on the Vinnies night patrol van and my mother and I would pack Christmas hampers for Josephite Community Aid and we developed good relationships with the local Sudanese families and I loved all that.

“Eventually I started to wonder how I could take the feelings and experiences I had in my volunteer work and apply that in an everyday sense in my professional work.

“I wanted something that touched the heart a bit more, so I quit my job and went and spent a couple of months volunteering with the Jesuits in Cambodia.”

Working with Mercy Sister Denise Coghlan, who was running the Jesuit programs in Cambodia, Helen helped in communications, writing reports, developing a new website and visiting the different works there.

“It was a turning point for me. I knew I wanted to work in the not-for-profit sector rather than the corporate world,” she says.

That idea became a reality when, shortly after returning to Australia, Helen took a job as head of Marketing and Communications with Catholic Healthcare.

“I felt like I’d found a real home. It was about people, not about an object or a product. It was about service too and I felt I was finally following my heart and desire to be with people and serve,” she says.

Five years later, when the opportunity came up to apply for the role of Head of Community Engagement at Caritas Australia, the Church’s international aid and development agency, it appealed to Helen because of her experience in Cambodia.

“Again, it was a Catholic organisation and aligned with my values and my passion for social justice and helping people in need. It gave me exposure to different dioceses and bishops, both locally and globally, and different ways of being Church. I had rich experiences there. It showed me such a link in the way people connect with the global family and the incredible generosity of people, especially through Caritas’ annual Project Compassion appeal,” she says.

“It was my first leadership role and I was working for a great boss, the CEO at the time, Jack de Groot, who really helped to grow me professionally.”

While at Caritas, Helen joined the board of Jesuit Mission, but at her first board meeting, the CEO resigned and she decided to step down from the board and apply for the job.

“It’s been a big shift for Jesuit Mission. I’m the first lay leader, the first woman and I wasn’t sure how the wider Australian Jesuit community would react to that, so I’ve been very committed, along with the Rector, Fr Trung Nguyen SJ, to ensuring that the Ignation charism remains a core part of what we do.

“It’s a practical spirituality, faith in action. It’s something I can relate to. It’s tangible. And the work we do at Jesuit Mission is really at the heart of who the Jesuits are. They are missionaries.”

Since 1951 the Australian Province of the Jesuits has had a missionary presence in India. Jesuit Mission was established to support those Jesuits overseas and to grow the apostolic work to now include parishes, schools, working with women, and with the Tribals. In 1999, with the Indian mission well-established, Jesuit Mission branched out to support other works in Cambodia, Myanmar, Timor and China.

“One of the things I really love is having the opportunity to meet with such generous donors and to hear their stories of what inspired them to give to Jesuit Mission.

“In many ways the world isn’t a great place at the moment, but then you see such strong solidarity with people who are in need overseas and it restores your faith. Sometimes our supporters are able to go and visit our works overseas and they come back changed people, transformed. They see the reality of what it means for a community in Timor to have the gift of being able to install a water tank so the kids don’t have to walk a couple of hours a day just to get clean water.

“It’s about being a Church for the poor, as Pope Francis has said. And to be able to work towards that and be a part of that is a wonderful opportunity.”

This original article was written by Debra Vermeer.