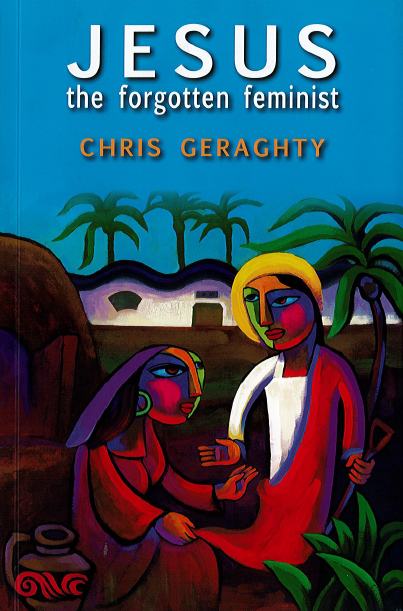 This article was written by Andrea Dean and was first published in Women Matter.

In telling the story of Jesus and his deeply personal relationship with his female friends and women in the marketplace, Geraghty attempts to reset the debate about the place and status of women in the communities of Jesus' followers. The significance of the book lies in Geraghty’s willingness to test the argument that Jesus chose and commissioned twelve male apostles, thus closing the door to ordination of women in the Catholic Church.

Jesus: The Forgotten Feminist is delightfully readable. While Geraghty has done extensive research using primary resources, the text is free flowing and often refreshingly direct, for example, “Mary was spellbound and her sister annoyed.” p. 127. “She (a woman) could not interpret the law for anyone- anyway most of them could not read”. P. 66

The tone and style of the book is very accessible. Background in scripture is not presumed. Geraghty does suppose that you share his disappointment with insipid images of Jesus, as ‘The Sacred Heart’ and that you understand that the Catholic Church has an extensive history of misogyny. Apparently, he intends to tackle influential Christian theologians and their impact on attitudes towards women in a future book.

The first part of the book develops the readers understanding of first century Judaism, Jesus’ essential message of the Kingdom, how the Gospels developed and attitudes to women at the time of Jesus.

The chapter on a woman’s world at the time of Jesus is excellent. Geraghty believes that understanding the cultural situation helps us understand how radical Jesus' attitude was towards women. He makes it clear that for cultural reasons women were largely confined to their homes, that Jewish purity rules had a major impact on how people related to one another and that Temple rituals supported the concept of male superiority. He goes into further detail to clarify “the role and attitudes to women as developed in Jewish culture over centuries and the place of women in the larger Greco-Roman world which was based on accepted gender differences and on a hierarchical -patriarchal societal structure”. p. 99

I enjoyed the second half of the book best. Here Geraghty employs a forensic approach to every instance in the Gospel that involves Jesus and women. ‘The close encounters with the opposite sex’ include: a woman caught in the act, the foreign woman at the well, two sisters at home with Jesus, a female admirer, the Syrophenician woman, the woman ritually and permanently impure, the might of widows, chaos in the synagogue, an ambitious mother. These, mostly unnamed, women become significant. For example, the crippled woman healed on the Sabbath (Lk 13:10-17), becomes important, as does Jesus deliberate engagement with her: he recognised her, spoke to her; touched her (therefore becoming ritually uncleaned himself); and cured her – on the Sabbath!

Geraghty discovers that Jesus’ behaviour as described in the Gospels was in complete contrast to what was expected of any Jewish man, especially of a preacher or teacher. Jesus was a radical, counter-cultural figure preaching a message of inclusion, of equality, of forgiveness, love and non-discrimination. His life was a moment of grace which, if grabbed with both hands, could have produced an entirely different cultural world.

Read Jesus: The Forgotten Feminist to be freshly inspired to create a world of justice, inclusion and equality. And the implications for ordination? Well, you’ll have to read it and find out.