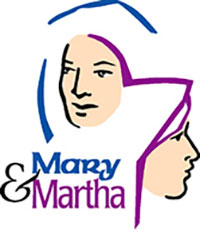 Martha and Mary are familiar biblical characters who continue to feature significantly in the developing tradition of the early Church. Their story in Luke’s Gospel (10: 38–42) focuses predominantly on human interrelationships.  So while an ecological reading will be attentive to those relationships, it will also seek to hear the voice of the other-than-human that may be present in the storytelling, even if only subtly.

The story opens with the word “now”, a word designating time. It is followed by a physical marker: they went on their way or were walking the road, as Lk 9:57 says earlier. Jesus’ ministry is located very explicitly in time and in place. It invites those wishing to read ecologically to be attentive to time. Such attentiveness can bring us to an awareness of cyclical time marked by the changing of the seasons, as well as linear time with which we are more familiar.

The “now” in the Lucan narrative prompts us to notice linear time and also to the cycles of life in both the human community and the other-than-human world of being. This includes cycles of birth and death, of planting and harvesting and of working and lying fallow even in our own and community gardens.

And just as this gospel is grounded in time, inviting us into a deep awareness of time, so too does it draw us into an awareness of space through its reference to their “walking along the road”. Such attentiveness does not focus on place and space simply as a backdrop for characters on a human stage — which has been our usual way of reading the gospels and other narratives. Rather, we recognise place and space as a living participant in the drama of an emerging universe. We can mar or scar place and space as we walk along the road of living and life, or we can recognise that we are in partnership with it every moment of every day.

Materials of Village and Home

In this vibrant context, Jesus enters a village, a grouping of houses. Each house would have been a unique interrelationship of materials associated with the work and life of the different members of that house. There would likely be grains and other sources of food from farm and courtyard gardens. Yarns and wool would have been in store or worked into bedding. And much more constituted the houses of the village that Jesus enters. This is true of Martha’s house also.

Not only is the household vibrant but so too are the human and other- than-human interrelationships.  In this Lucan story, the woman Martha welcomes Jesus into “her” home. She is presented very clearly as the householder who has oversight of or works in right relationship with all that constitutes the household — other-than-human as well as human. Mary too is presented in a way that would have crossed or expanded cultural expectations and boundaries for some.  She is characterised as a disciple of Jesus, seated at his feet and listening to his teaching.

Martha is Engaged in Diakonia

However, the ecologically sound context of rightly ordered relationships is shattered by the “but” at the beginning of Lk 10:40. It introduces a process into the narrative that pits the two sisters over against one another. Even more it attributes the creation of the division to Jesus.

Martha is described in the NRSV translation as being engaged with “many tasks” and she is said to be distracted by these tasks.  However, the Greek word translated as “tasks” is diakonia. That is language that Jesus uses later to describe his own ministry (Lk 22:27) and to characterise that of his disciples whom he commissioned to preach and to heal (Lk 22:26).

Luke says that Martha is engaged in a diakonia or discipleship role, perhaps undertaking healing and proclamation roles as Jesus invited his disciples to do (Lk 9:1).  She is also hosting the Jesus group on their itinerant mission.

The Lucan narrator presents Jesus as negating Martha’s diakonia, calling it distraction and pitting it over against Mary’s role of listening to Jesus’ teachings. Attentive readers will be alert to the function of gender in this narrative. Just prior to this story, the lawyer who questioned Jesus about inheriting eternal life is commissioned to be neighbour to the one in need by showing mercy (Lk 10: 25-37). In this very next story, a woman’s discipleship or active diakonia or doing of mercy is criticised while another woman’s sitting at Jesus’ feet and listening to what he is saying (Lk 10:40) is affirmed.

An ecological reader engaging with this well-known story may recognise what is stated in Laudato Si’ (par 139) namely that “we are faced not with two separate crises, one environmental and the other social, but rather with one complex crisis which is both social and environmental”. A complex social crisis has been woven into the material context evoked in the Lucan story and explored earlier in this article.

As contemporary readers it is important to be attentive to these social threads in the story and to understand what may have informed them.  In this regard, there is both narrative and inscriptional evidence of women householders in Hellenistic Judaism and early Christianity.  Some of these women householders hosted the gatherings in which the believers in Jesus listened to the word and broke bread. There seems to have been tension around such roles in the Lucan story-telling community and this has become encoded into the final gospel story.  Martha’s diaconal role and household leadership is set over against Mary’s listening to and learning from the teachings of Jesus. This obscures the fact that both roles were undertaken by women in emerging Christianity.

And a contemporary ecological reader, attentive to environmental and social factors, will attend to space and time as well as to the multifaceted social crises that characterise this narrative.  Critical engagement with the gendering of discipleship in this text will enable the ecological reader to reclaim the roles of both Martha and Mary.  Women are called to the work of diaconal household leadership as well as listening and learning within the Jesus movement. They are called to mirror the role of Jesus in both roles.  Both roles constitute the vibrant discipleship that characterised the material space, the home of Martha and Mary.