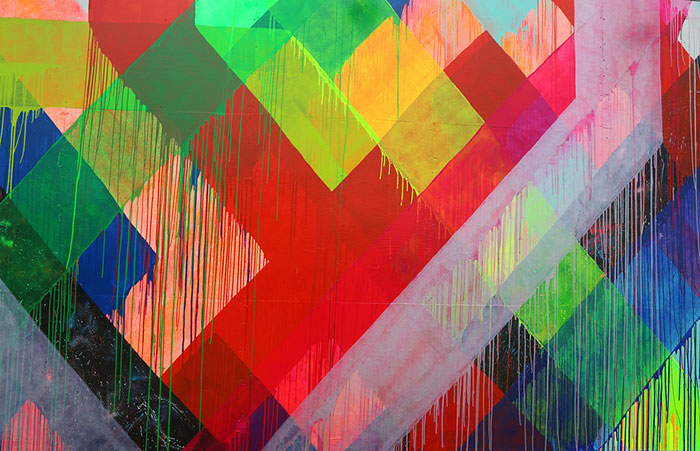 Messages of tolerance and peace

This article was written by Amy Calfas and was first published in USIP on 4 May 2016.

In Pakistan, a series of vibrant murals has gone viral, inciting discussion, online and in city streets, about gender-based violence and discrimination. Young women artists changed the landscape of the country’s largest cities as they worked with communities to turn local people’s stories into art that claims public spaces for messages of tolerance and peace.

In the city of Lahore, the gray, concrete side wall of a National Bank of Pakistan office has been transformed with a mural colored with vivid splashes of crimson and gold. A legend in Urdu asks: ‘What will people say? But we are also people; what will we say?’ The larger-than-life painting is one of several that recently have brought new color to Pakistani cities and new conversations to Facebook, Buzzfeed, the South Asian edition of Vogue, and Pakistani newspapers Dawn and The Express Tribune.

The new public murals in Lahore and other Pakistani cities are a living testament to the power of feminist solidarity to unite people across borders and to create new narratives and dialogue on these issues. The project brought an Indian artist, Shilo Suleman, across the two countries’ still-disputed border to support a ground-breaking dialogue on social issues faced by women and men in both countries.

In her home country, Suleman founded a group, Fearless Collective, following the fatal gang rape of a 23-year-old New Delhi medical student in 2012. The case stunned India and led to what many women’s activists described as fear mongering that deterred women from entering public spaces.

In response, Suleman gathered visual artists, filmmakers, street artists, photographers and advocates around the globe to use art to tell their stories about gender-based violence. In 2015, Pakistani sexual rights activist Nida Mushtaq invited Suleman to join her for some work in Pakistan. Their project, Reclaiming Public Space Through Street Art, received support from USIP’s Peace Innovation Fund, which provides small grants to support creative approaches to peacebuilding throughout Pakistan. The project also was featured in a recent webcast panel discussion at USIP.

Mushtaq and Suleman say their project centers on a common goal of the feminist movement and graffiti artists—to reclaim the right to public space. Women in South Asia face “a state of disarray and decay,” Suleman said. “Our job as artists and as activists was to transmute these spaces to bring them to their highest potential while sharing stories that are relevant and contextual to us and are beautiful at the end of the day,” she said.

Before producing a mural in any locale, Fearless Collective holds workshops with members of the community to identify a message and an iconography for the painting. This step engages those community members, including marginalized groups, in deciding what narrative is projected through the murals in the public space. The collective encouraged women and their supporters to paint the murals, and openly discuss their content, together.

During the three-week project in Pakistan, the group and its partners painted murals in three cities, and held a street exhibit of paintings and pictures from the project in Karachi, Pakistan’s biggest city. In Lahore, Fearless Collective hosted workshops during the Faiz Festival—a four-day celebration of music, art and literature. Attendees focused on societal pressures and expectations that weigh on women, often silencing their voices.

In Rawalpindi, Fearless Collective’s artists worked with the transgender community. They painted a mural depicting Babli Malik, the leader of a local transgender group, Wajood. The mural shows Malik riding a motorcycle with the message Hum hain khuda-e-takhleeq—“I am a creation of God.”

In Karachi, the group worked in Lyari Town, a neighborhood dominated by slums. “Lyari’s story is always told as a place with gangs, but we wanted to tell a different story through some beautiful art,” Mushtaq said. “It was an attempt to drop the labels that marginalize certain places and people.”

Is Art the Future of Peacebuilding?

Other Pakistani initiatives, such as IamKarachi and Lahore’s Street Art Pakistan, have created aesthetically beautiful walls with the help of local artists. But Fearless Collective’s Reclaiming Public Spaces project is unique in its emphasis on engaging with communities and painting only narratives that are developed collectively by the communities’ members.

“We worked with the community and everyone was involved,” said Suleman. “Every chai wallah [tea seller] every ladder seller, and all of the kids off of the street join in on the painting, so apart from the finished product—which is the wall—there’s also the finished product of painting in a space for four days and building relationships. We’re trying to show that through storytelling one builds a sense of empathy…and [to] create impact through beauty,” she said.

The intensive engagement of the community helps to assure the murals’ upkeep, said Mushtaq. “Because they [the paintings] were created with the community, the community ends up taking care of them. We all feel a certain affiliation to the murals and take collective ownership of them.”

Fearless Collective’s work speaks to the need for dynamic, participative storytelling for social change to create dialogue on gender and sexuality issues that are often seen as taboo in South Asia.